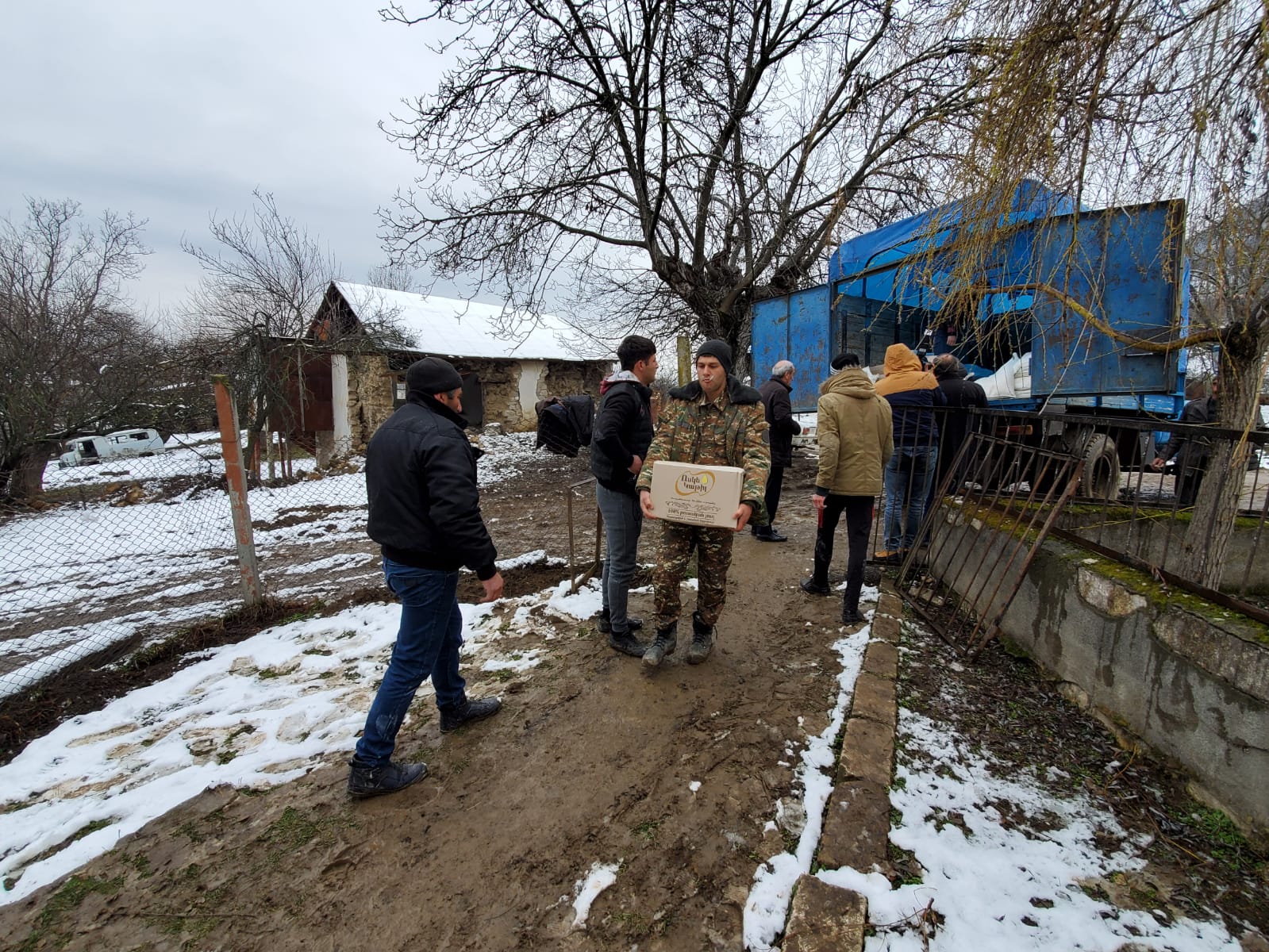 The residents of Herher and its surrounding villages, Kherkhan and Tsovategh, came under heavy bombardment during the 44-day war against Azerbaijan late last year. Over the past few months, thousands of families who had fled the region during the intense battles have returned to their homes, many of which have sustained substantial damages. Because of the war, many villagers also lost their harvests and were unable to adequately prepare their food reserves for the winter. 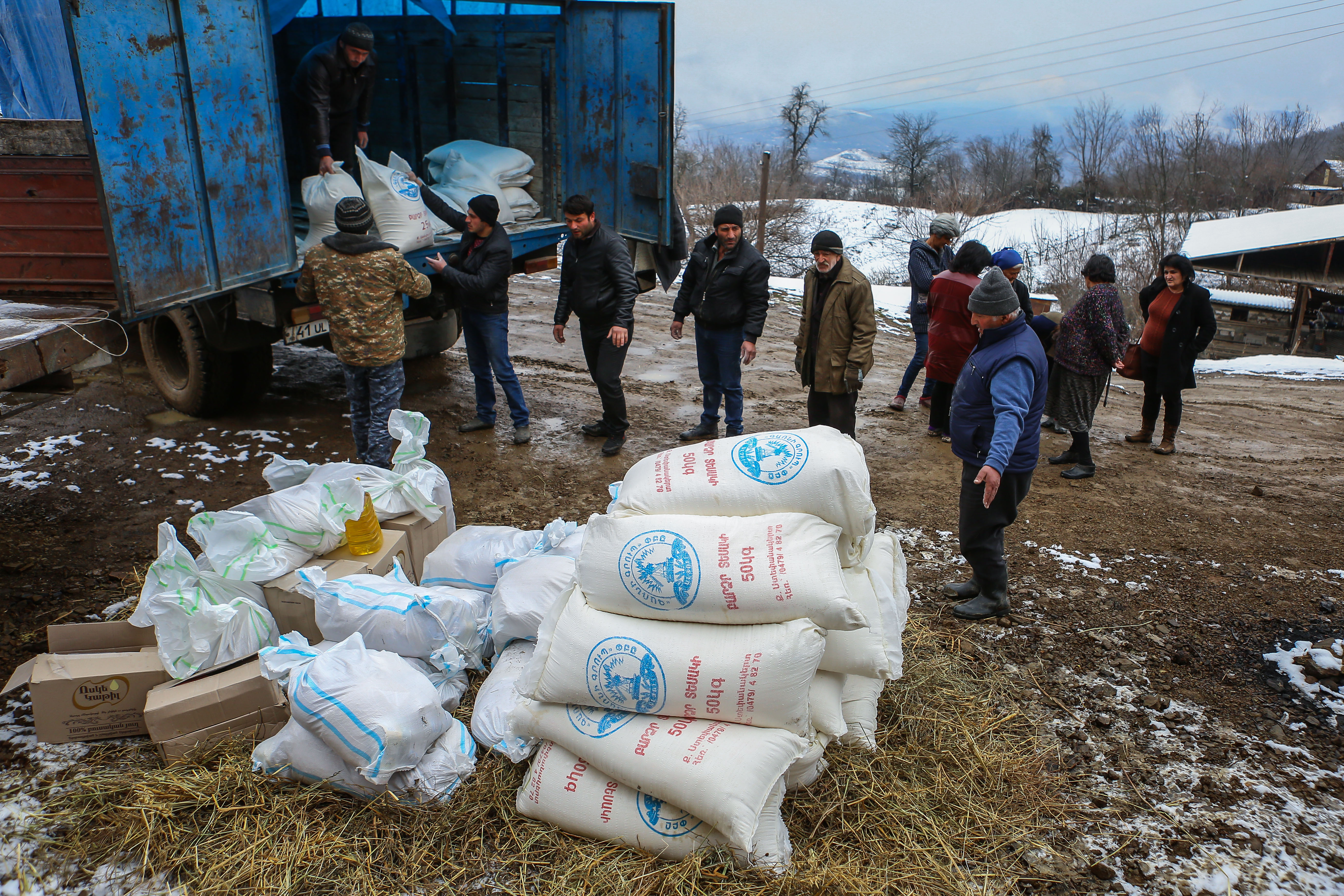 A scene from the March 5 distribution in Kherkhan

“The villagers are returning to their ancestral homes—these villages and towns are all they have known, and this is the region that made them the people they are. They are returning with the hope of rebuilding their lives and their homes, not only for themselves but for generations to come,” said Tufenkian Foundation executive director Raffi Doudaklian.

The first distribution took place on Dec. 25, 2020. While many around the world were celebrating Christmas, the Tufenkian Foundation staff, accompanied by several dedicated volunteers from the United States, traveled to the villages to help with the effort. The families in the three villages were given special food packages, which included flour, rice, buckwheat, pasta, oil, and other staples.

One of the volunteers, Dickran Khodanian of Los Angeles, Calif., said that the aid could not have come at a more crucial time for the villagers. “The humanitarian aid distribution came at a time when there was not much help getting to the residents of these distant villages. I am happy that organizations like Tufenkian and Izmirlian continue to focus their efforts and energy in these places; I am glad that the needs of our compatriots there are not ignored,” explained Khodanian.

Subsequent distributions were carried out in the region on Jan. 23 and March 5. “The purpose of our partnership with the Izmirlian Foundation is to help ensure that the residents of the affected villages can overcome the challenges of the harsh winter. This food assistance helped lessen the financial burden on villagers during these months, enabling them to take care of other necessary expenses,” said Doudaklian. 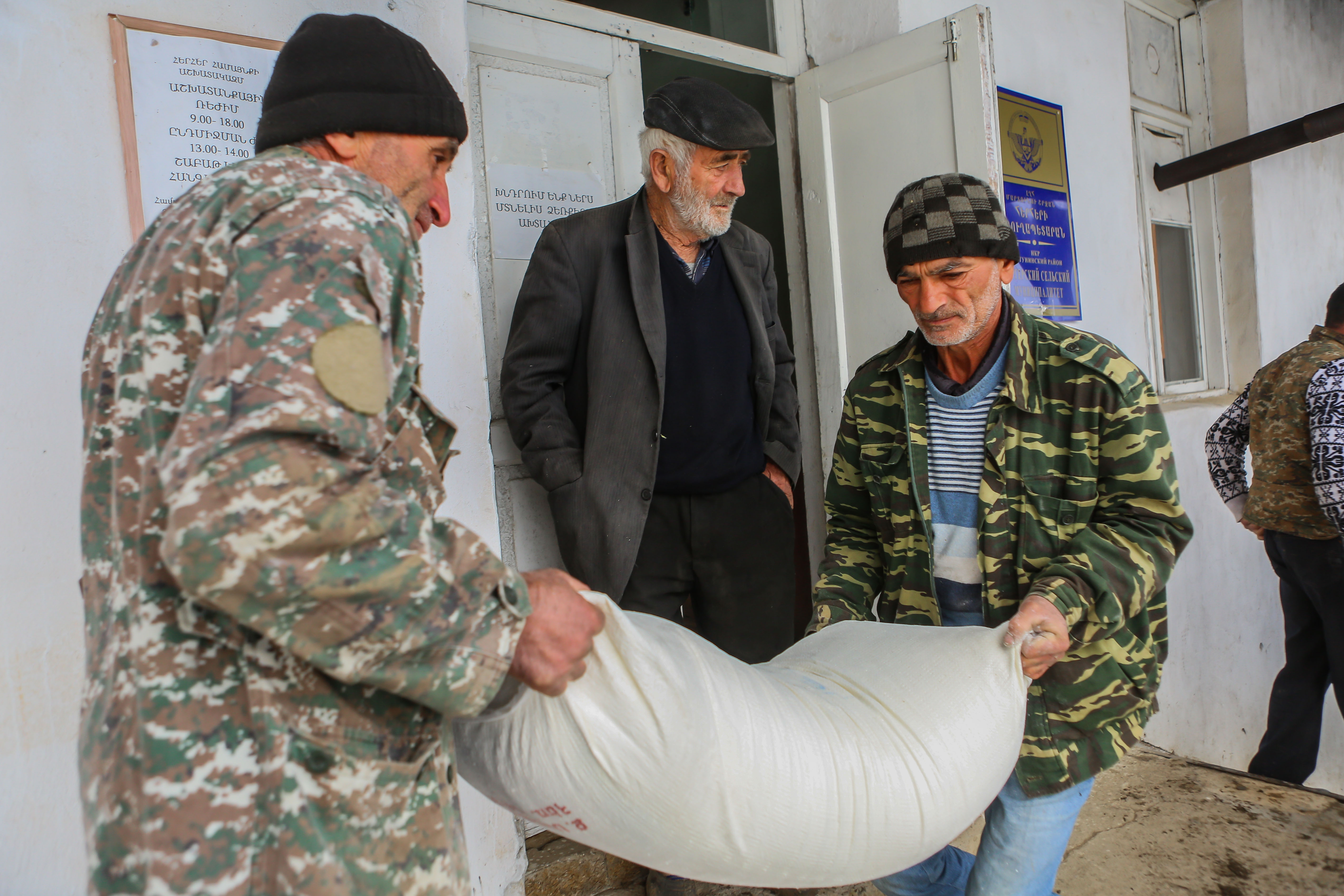 A scene from the March 5 distribution in Herher

Established in 1990 by Dikran Izmirlian, the Izmirlian Foundation has launched and implemented diverse initiatives in the areas of education, healthcare, economic development, social welfare, and the preservation of Armenian cultural heritage.

Tsovategh, one of the three villages where the program was implemented, is home to around 150 residents. The ancient Armenian village was made a target during heavy bombardment in the region during the most recent war against Azerbaijan. According to Tsovategh’s Mayor Samvel Abrahamyan, programs like the food distributions allow for the residents to remain in the village and to carry on their families’ legacies who have been there for generations.

Kherkhan’s Mayor Grisha Karapetyan also thanked the two foundations for their work in his village, which is home to a historic 11th-century cemetery. “On behalf of the people of Kherkhan—a resilient people, but one in desperate need following the war—I would like to extend my deepest gratitude to all those who made this project possible. The residents of Kherkhan felt empowered and inspired when they realized that our compatriots have not forgotten about them. We look forward to working with the Tufenkian Foundation in the future,” Mayor Karapetyan explained. 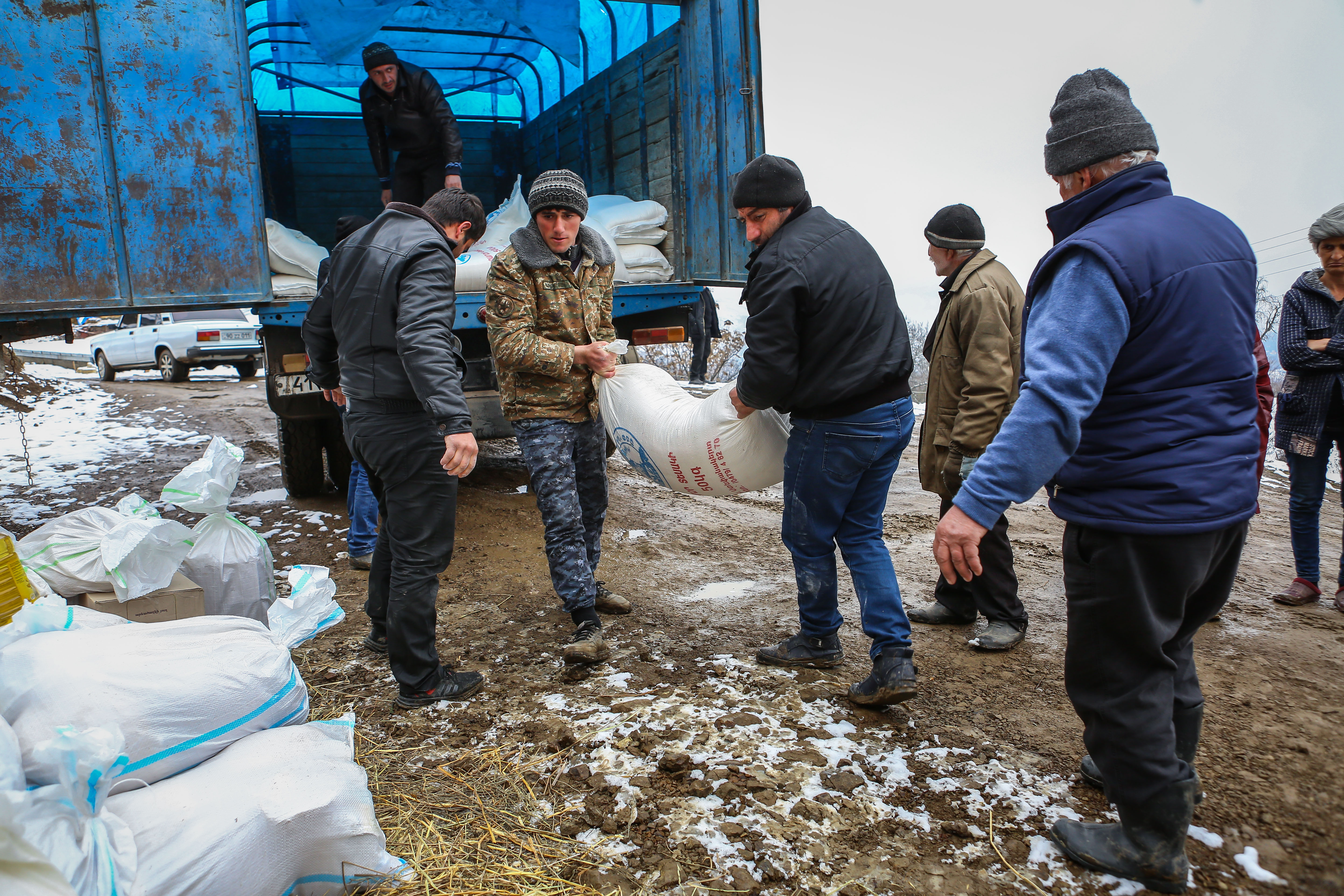 The distribution of humanitarian aid is one of several projects the Tufenkian Foundation has started to implement in the affected Martuni region. Last month, the Foundation announced that it is renovating and restoring a total of 13 homes in the region that have suffered major damages during the war, as well as the family homes of fallen soldiers. The renovation project is being implemented in cooperation with the Hayastan All Armenian Fund (Himnadram). The Avagyans, an Armenian family of eight whose home sustained major damage by Azerbaijani shelling last year, were the first family to move back into their renovated house as a result of the project.

Speaking about the importance of continuing to invest in the most vulnerable parts of Artsakh, Raffi Doudaklian said that investment in the area is more important now than ever before: "We, at Tufenkian, believe that the homeland must be built on determination and hard work. The Tufenkian Foundation is always ready to support the people of Artsakh and Armenia.” 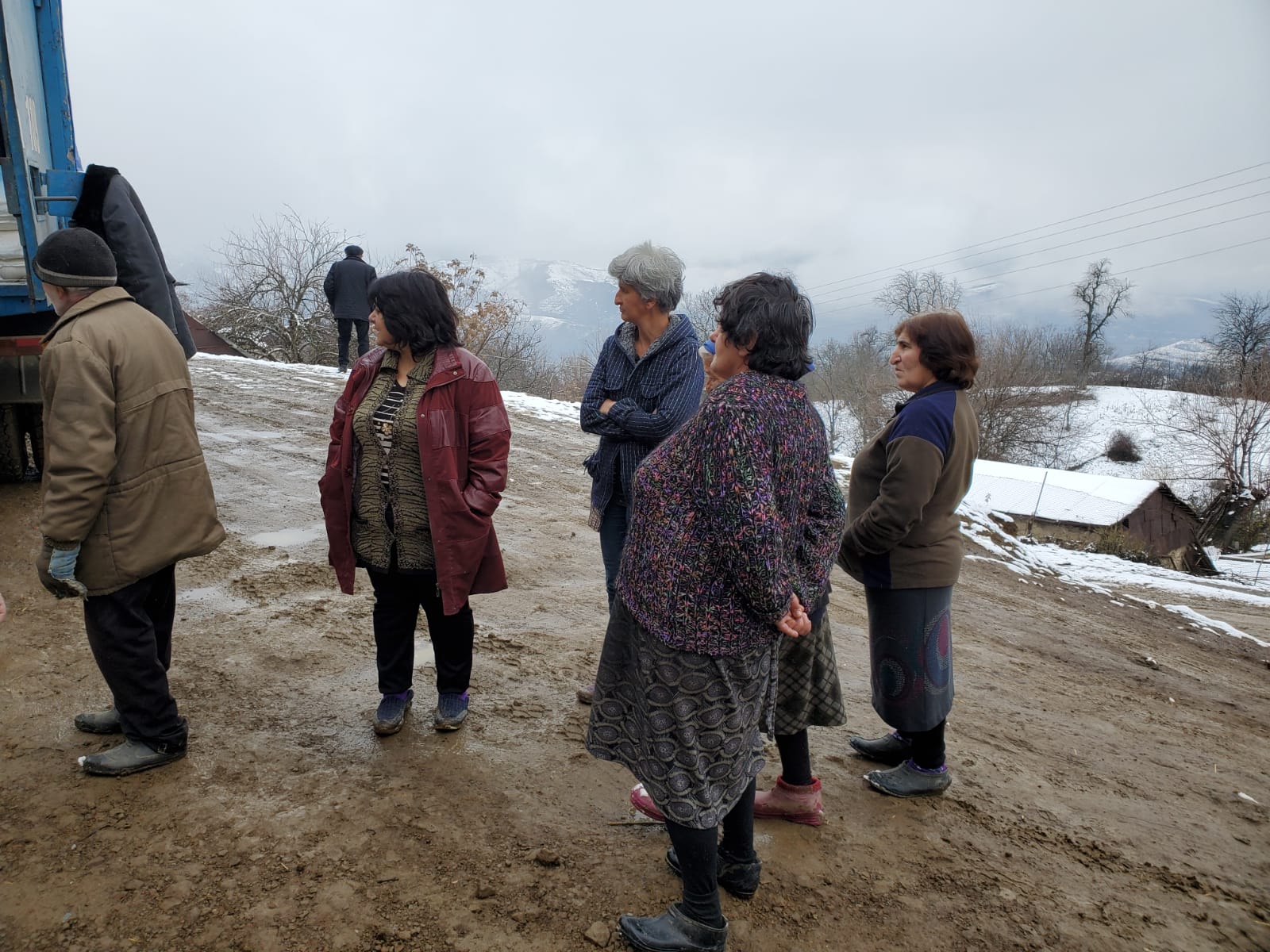 Villagers waiting for their aid packages