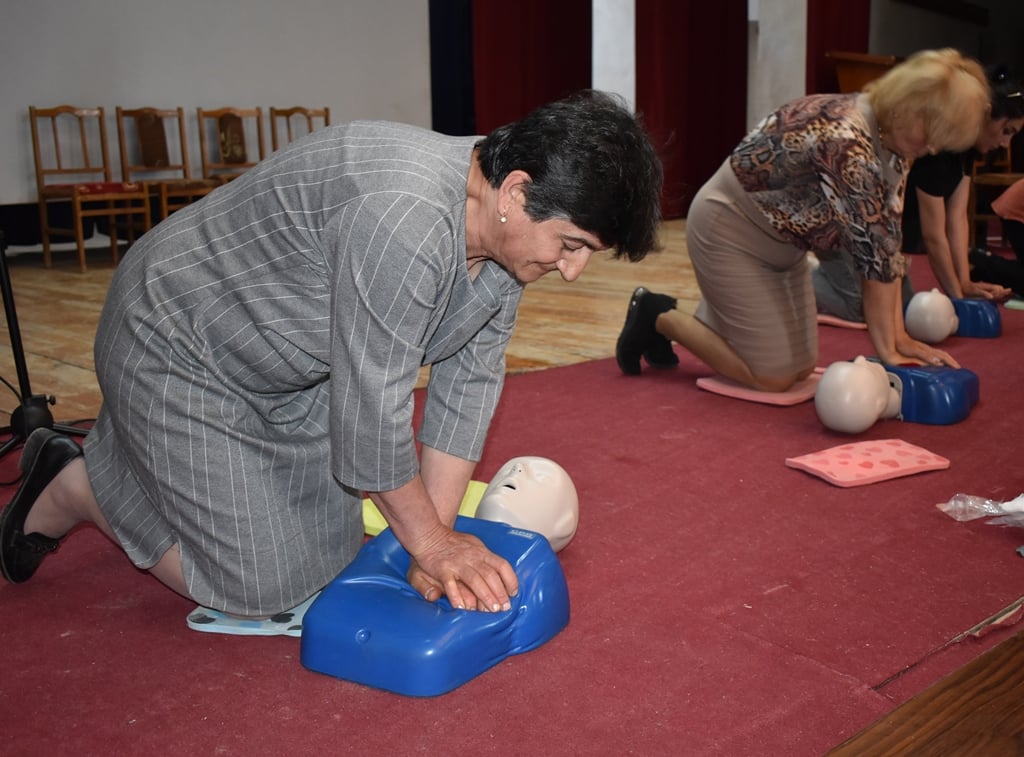 MARTUNI (Tufenkian Foundation)—More than 230 people across Artsakh’s Martuni region received emergency medical and trauma training from April 29 to May 3. 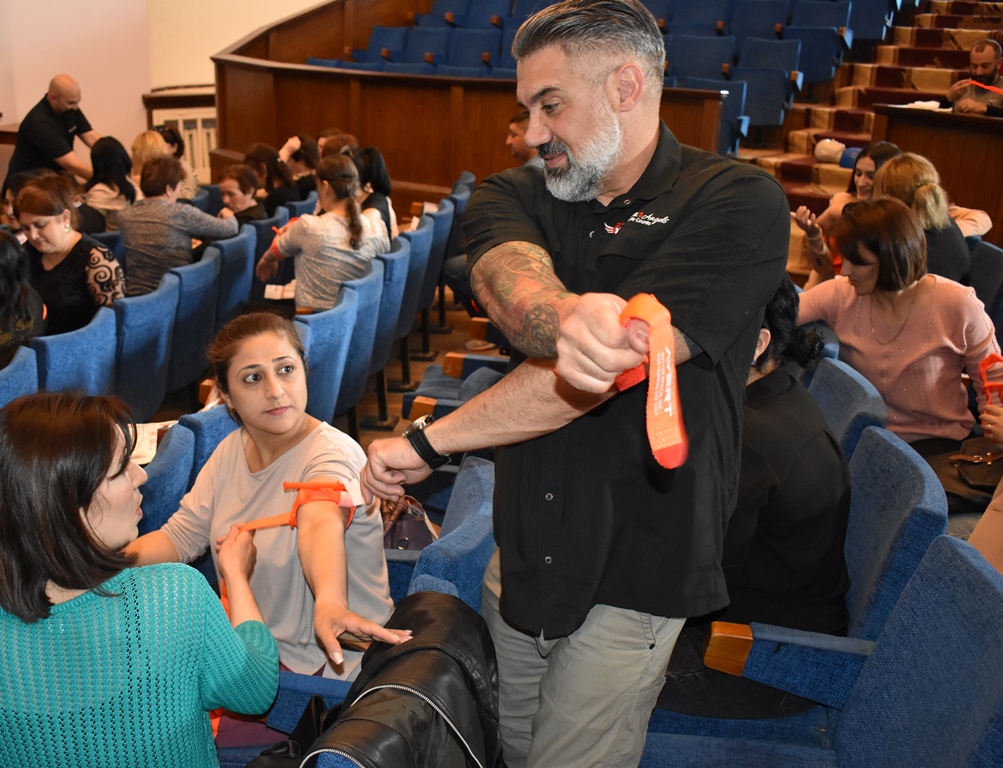 The training sessions, which were organized as part of the Tufenkian Martuni Healthcare Development Initiative, took place in the city of Martuni and the towns of Bertashen, Karmir Shuka, and Sos. First-responders, such as police, fire, and local health clinic personnel; community leaders, including village administration and school faculty; as well as high school students participated in the sessions conducted by the California-based Code 3 Angels.

“These specific groups are being targeted as people who community members would likely turn to when confronted with an emergency medical situation. In addition, many high school students will soon be serving in the military, where such training will be invaluable,” said Tufenkian Foundation director Greg Bedian. “The Code 3 Angels did an excellent job working with this diverse group of participants. Their professionalism, positive attitude, and good humor kept everyone engaged,” Bedian added.

The training was developed by the American College of Surgeons Committee on Trauma for the U.S. Department of Defense. It instructs participants on methods to limit blood loss due to trauma. After completing the training, each participant received a course completion certificate and a personal trauma kit that contains hemostatic gauze, a military-grade

tourniquet, and other essential items. 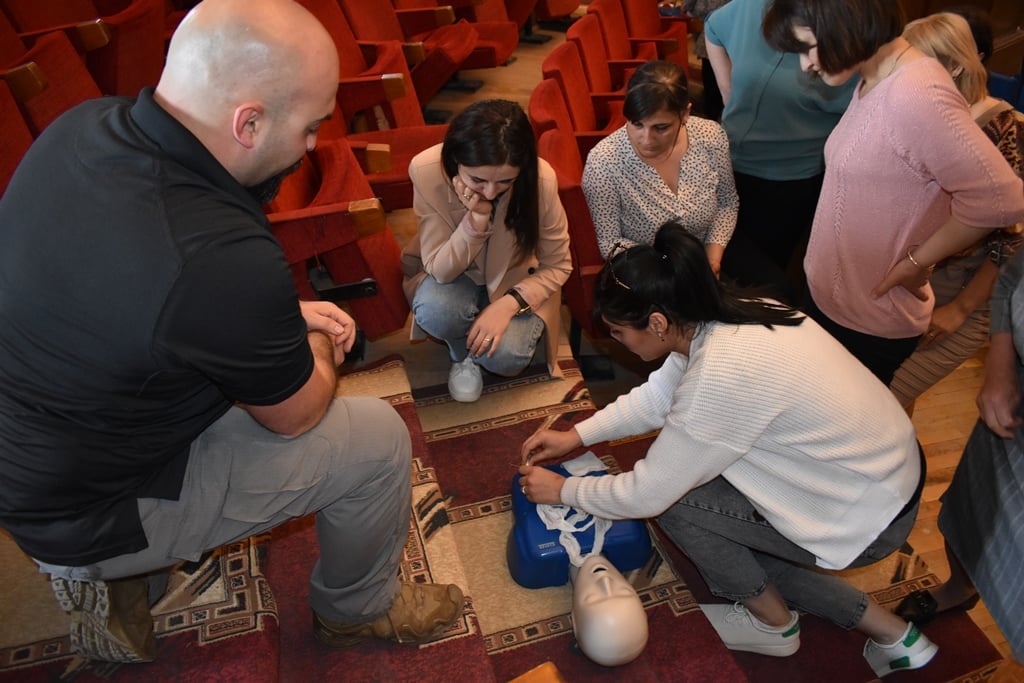 The villages of the Herher Cluster are nearly an hour away from the nearest medical facility in normal weather.  Snow, ice, and rain can make this journey take even longer.  By training many people who are geographically dispersed throughout the community, the amount of time between a person suffering trauma and then receiving emergency medical attention, those critical first few minutes, can be significantly reduced. “In a rural area like southern Martuni, serious injuries incurred from accidents involving agricultural machinery, automobiles, or even farm animals can be unnecessarily life-threatening because of the time required to receive appropriate medical aid,” Bedian added.

The Martuni region has taken on greater strategic significance since the 2020 Artsakh War. This area, though heavily damaged by war, now stands as a vanguard for the rest of Artsakh. “There are also real dangers posed by unexploded munitions from the 2020 War and the ever-present risk of sniper fire or other attacks by Azeri soldiers posted approximately a kilometer away. Bearing this in mind, it becomes clear that some sort of intervention is required,” Bedian noted.

Beyond the impact of potentially saving lives, the training also aims to empower participants to know that they can make a difference. “This newfound confidence might then be transferred to other aspects of their lives. Also, this experience may spark an interest among the younger participants to consider careers in healthcare,” Bedian added. Artsakh has a critical shortage of healthcare workers, especially following the 2020 War.

“This week, we empowered the people of the land that is so close to our hearts; it has been so rewarding. My heart is happier knowing the people of Artsakh are being empowered,” noted Code 3 Angels founder and director Joe Krikorian. Kirkorian is a retired paramedic-firefighter who established the educational non-profit in 2014. 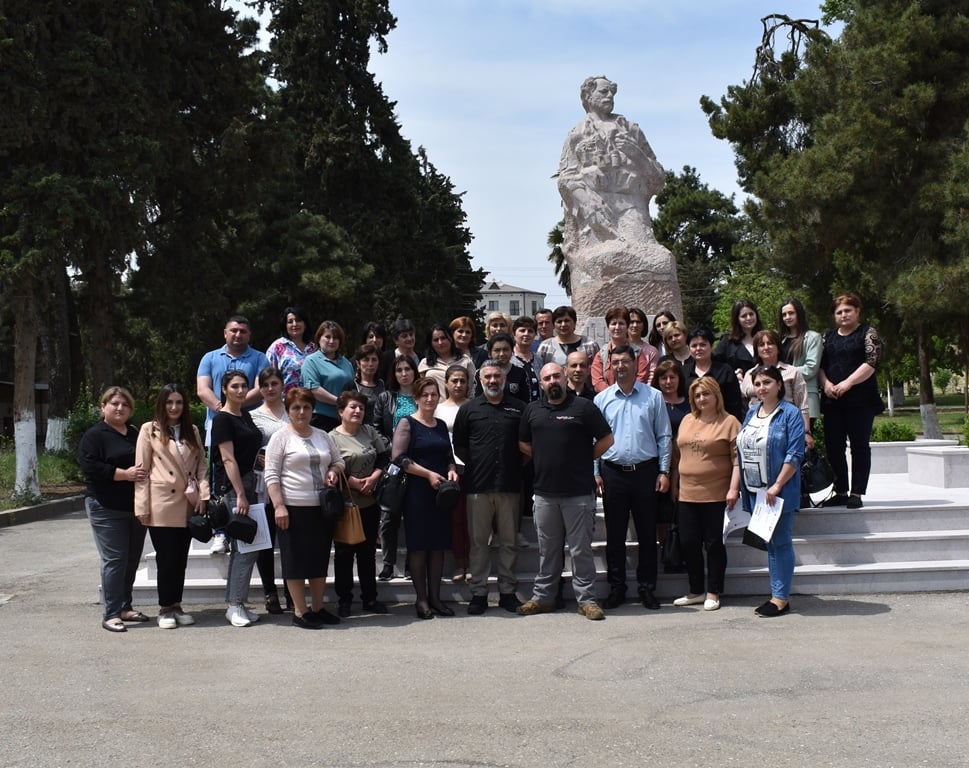 Some of the participants with Code 3 Angels volunteers and the Deputy Head of the Martuni Regional Administration Vadim Danielyan at the Monte Melkonian memorial in the city of Martuni (Photo: Amaras)

The Code 3 Angels began its journey by providing pediatric emergency care training and basic first aid, CPR, AED, and first responder training in Armenia and Artsakh. These programs later expanded to Lebanon, Mexico, and communities in the United States. The Code 3 Angels team is made up of current and former first responders who bring their real-world experience to the training room.   The instructors are volunteers and receive no compensation for their services.

“I would like to sincerely thank the Tufenkian Foundation for having the foresight to organize and sponsor these types of initiatives, which make important, life-saving training a possibility for the people of Artsakh,” Krikorian added.