The Armenian edition of ‘Storm Over the Caucasus’ published in Yerevan

Yerevan (TUFENKIAN FOUNDATION)—The Armenian translation of Storm Over the Caucasus («Փոթորիկ կովկասում»), a collection of articles by Russian, Armenian, Turkish, and international experts on the 2020 Artsakh War, was recently published by Yerevan-based publisher Newmag. The Armenian edition was translated by CivilNet’s editor-in-chief Karen Harutyunyan and sponsored by the Tufenkian Foundation.

Originally published in Russian by the Moscow Center for Strategies and Technologies in 2021, Storm Over the Caucasus (Буря на Кавказе) is edited by Ruslan Pukhov. The book features nine articles by 12 experts, including political scientists and military strategists, who address various aspects of the War, including military operations and regional developments. The book’s foreword was written by former Chief of the General Staff, Yuri Baluyevsky, and its epilogue was penned by Dmitri Trenin, the director of the Carnegie Moscow Center.

The Armenian edition was presented to the public as part of Newmag’s annual Summer Fest, which took place at Yerevan’s Yeraz Park on July 16. It was one of seven new books released by the publisher that day.

“The book delves into a variety of topics, but most chapters either attempt to explain how Azerbaijan won the war, including details of the weapons employed and lessons for modern warfare, or the geopolitical ramifications of the conflict, particularly for Russia and Turkey,” writes Rob Lee, a senior fellow at the Foreign Policy Research Institute, in his review of the book for the Centre for Analysis of Strategies and Technologies (CAST).

The book’s translator, Karen Hautyunyan, said that since Nov. 2020, there have been many discussions and speculations among the Armenian public regarding the disastrous defeat in the war, from conspiracy theories to accusations of political immaturity. “By providing wider access to the book to the Armenian public, experts, and especially decision-makers, we can work to correct the mistakes made in the war and help prevent them in the future,” Harutyunyan said. 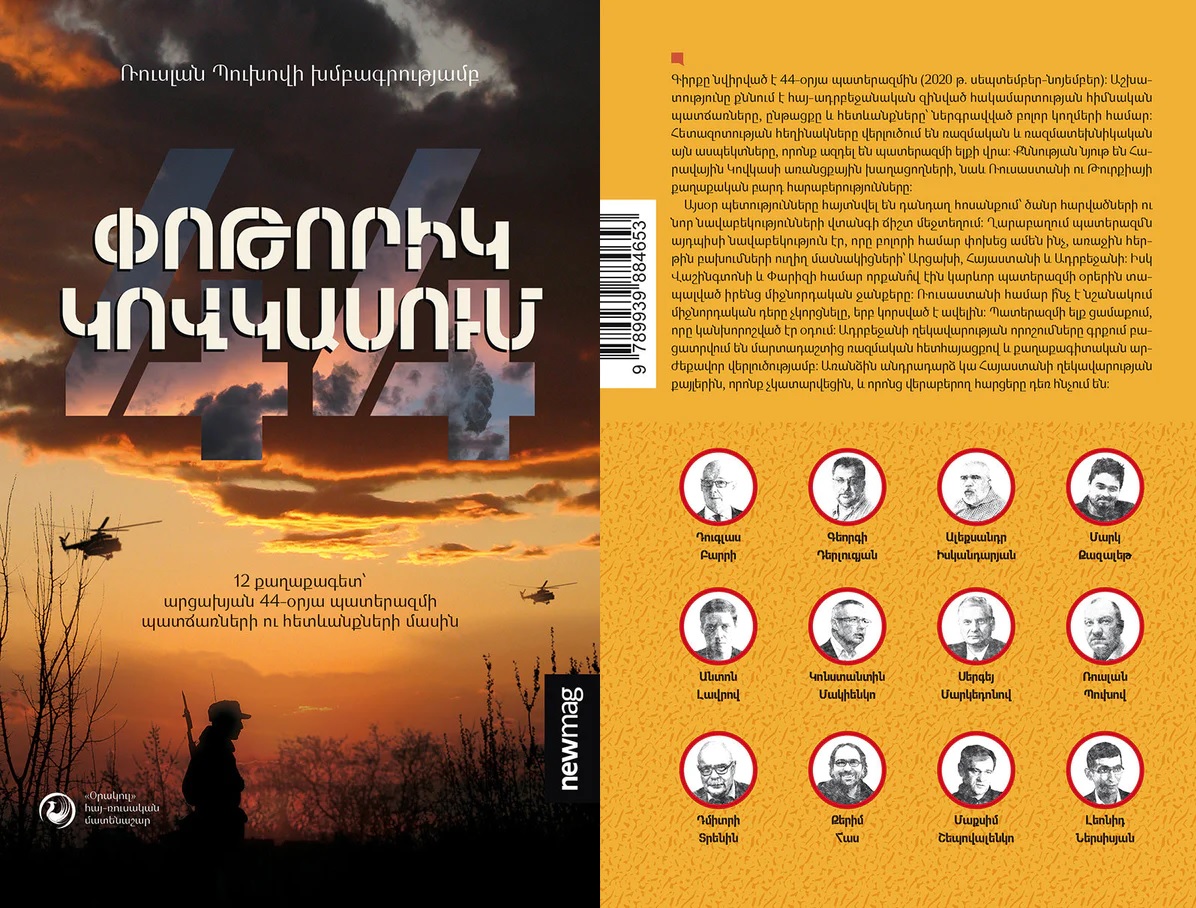 The front and back covers of 'Storm Over the Caucasus'

Storm Over the Caucasus is a valuable resource for military experts, political scientists, journalists, university and graduate students, as well as for anyone interested in the war and modern warfare. The book is available at bookstores across Armenia. Those interested in purchasing the book in the United States can do so through the Online Armenian Store.