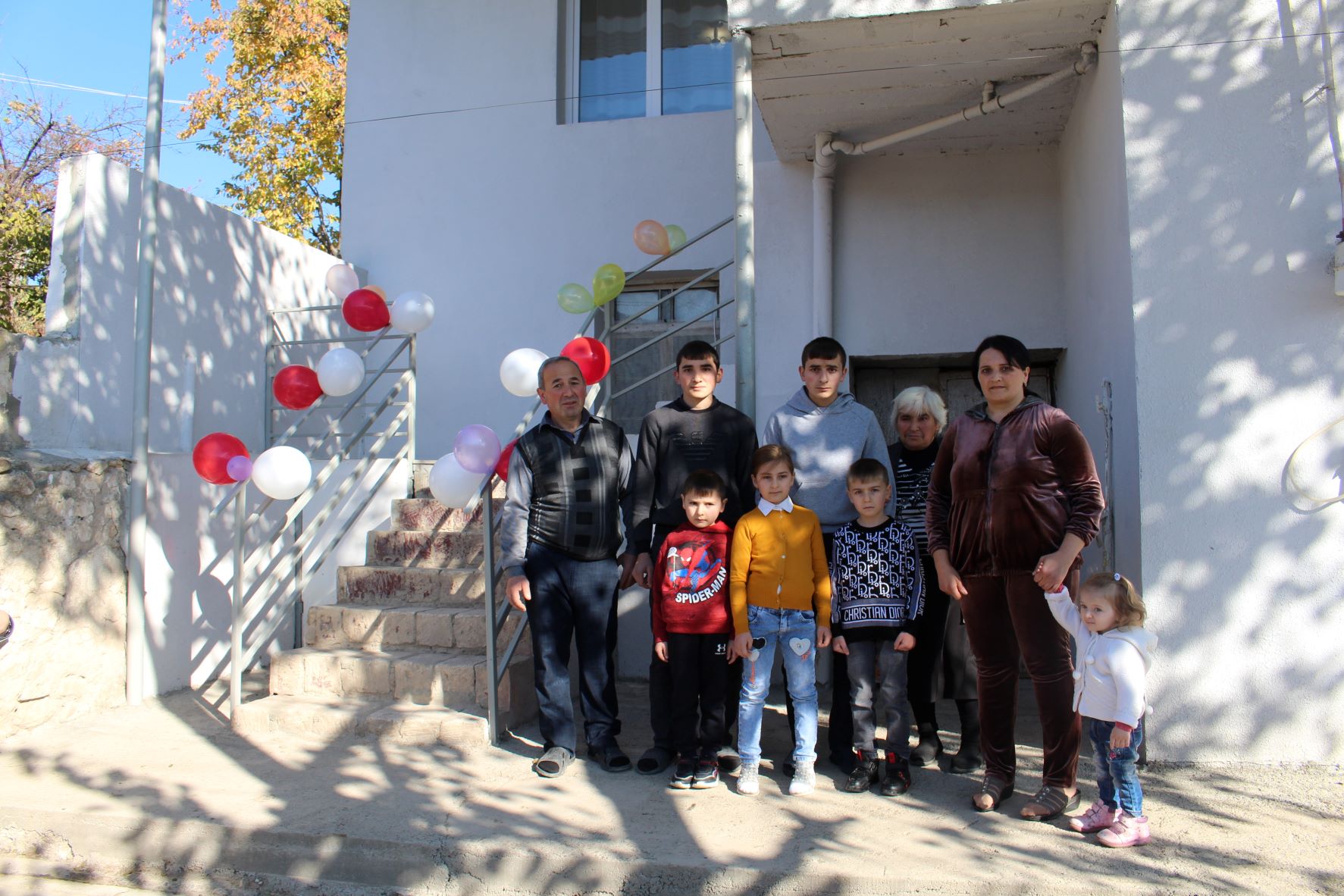 The Shahnazaryans get a new home in Artsakh’s Karmir Shuka

Karmir Shuka, Artsakh (TUFENKIAN FOUNDATION)— 2020 Artsakh War veteran Artak Shahnazaryan and his family were given the keys to their rebuilt home in Karmir Shuka on Nov. 14.

“The Tufenkian Foundation is happy to do its small part for the people of Artsakh and seeing the smiles on the faces of the people, young and old, makes it all worth it,” Foundation public relations director Rupen Janbazian said in his remarks.

Artak was injured while fighting in the 2020 war against Azerbaijan; he was hit by shrapnel in his legs and suffered upper body injuries in a drone attack. The Shahnazaryan home also suffered shrapnel damage in the war.

Artak and his wife Narine are parents to five children—Valerik, 16; Artur, 15; Anna, 7; Avet, 5; and Astghik, one year and eight months. Narine’s mother also lives in the family home. The renovations included the addition of two new bedrooms and a bathroom. The home’s kitchen and existing rooms were also renovated, and the windows throughout the property were replaced.

The Nov. 14 ceremony was attended by the Shahnazaryan family, Karmir Shuka’s Mayor Narek Atayan, advisor to the Artsakh State Minister and strategic planning coordinator for humanitarian assistance Hagop Ipdjian, representatives of Tufenkian Foundation’s Stepanakert and Yerevan offices, and other dignitaries.

In his address, Janbazian thanked the construction team, the Karmir Shuka Mayor and administration, as well as all the donors and supporters who made the rebuilding of the Shahnazaryan home possible. The Tufenkian Foundation has actively supported wounded soldiers and their families since the April 2016 War. Focusing on accessible housing, Tufenkian has aided veterans disabled during the first Artsakh War in the early 1990s, the 2016 War, those injured during other attacks along the line of contact over the years, and most recently during the 2020 War.

“Today is a special day for the Shahnazaryan family, a day of happiness,” Artak Shahnazaryan said in his toast, surrounded by his family. “We thank the Tufenkian Foundation, the donors, and all who made this a reality for my family. These may be tough times for our people, but we feel strong by being here on our land and in our home.”