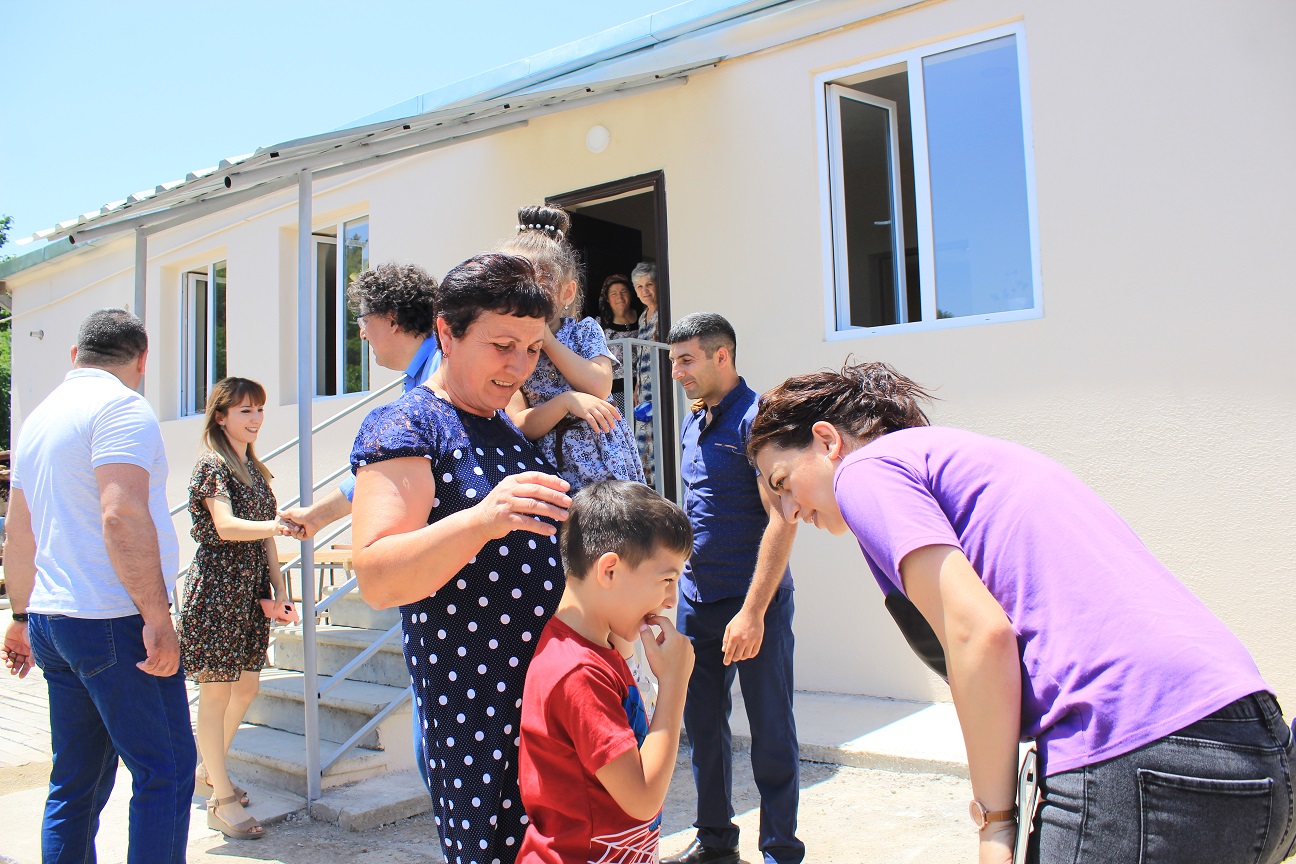 HERHER VILLAGE, Martuni, Artsakh (TUFENKIAN FOUNDATION)—Two more families in Artsakh’s Martuni region were given the keys to their rebuilt homes last week, as part of the Tufenkian Foundation’s Martuni Village Home Renovation and Repair Project. The homes of the Hayrapetyans of Machkalashen village and the Sargsyans of Herher village sustained major damages by Azerbaijani shelling during last year’s war. 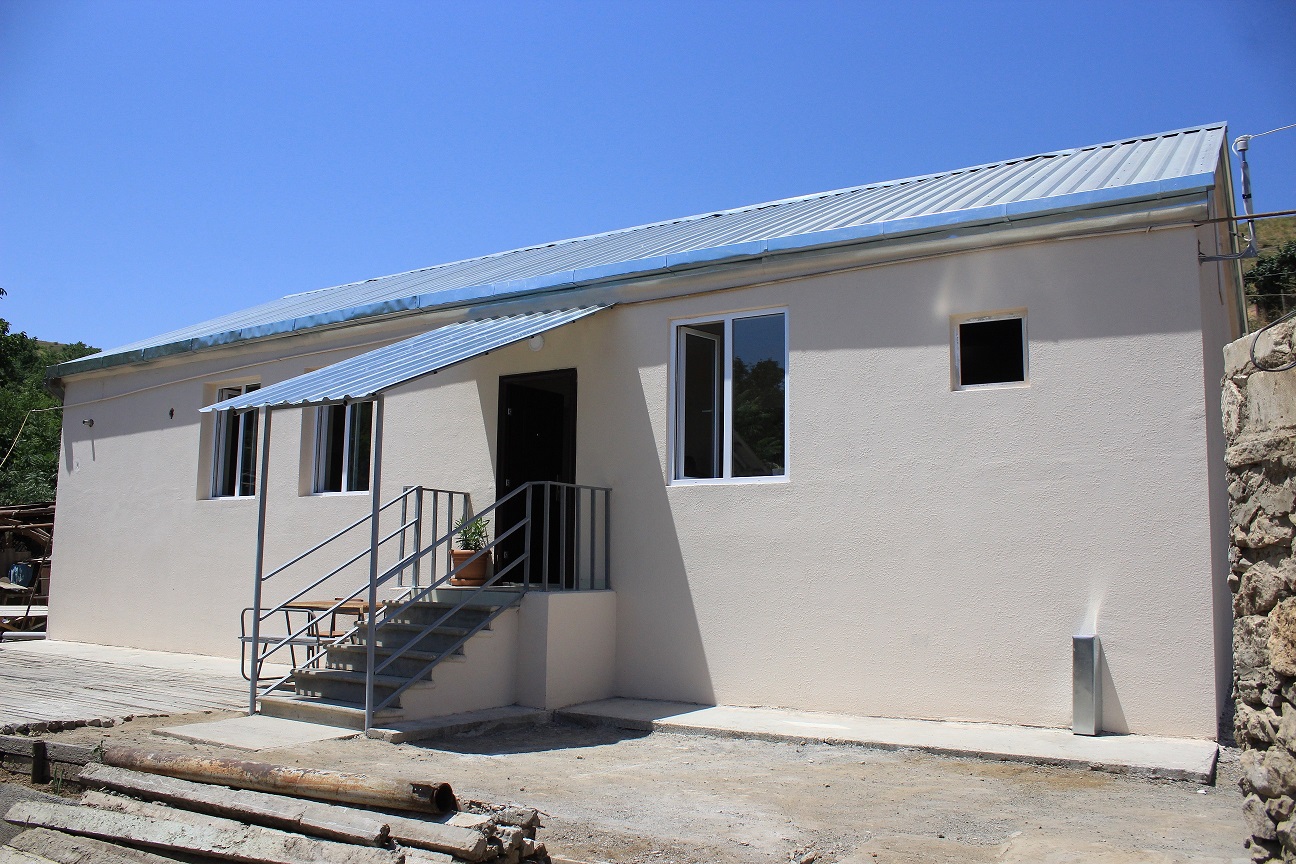 The Hayrapetyan family home in Machkalashen after it was completely restored (Photo: Tufenkian Foundation)

Zina Hayrapetyan, who serves as Machkalashen’s head nurse, lost her husband during the Artsakh Liberation War in the early 1990s. The Hayrapetyan home was hit twice during last year’s war while her son was serving in Hadrut. “Our family home was completely destroyed; it was in utter ruins. It was difficult to imagine that it could ever be rebuilt in such a short amount of time,” Hayrapetyan explained during an intimate ceremony on June 25, to mark the completion of construction of the house, which is home to five members of the Hayrapetyan family.

“Following the war, our board of trustees decided that the Foundation should only focus on the most immediate, pressing needs in Artsakh: the renovation and reconstruction of damaged homes, addressing the housing issues of our wounded soldiers and the families of our fallen,” explained Tufenkian Foundation trustee, Dr. Antranig Kasbarian. “We are looking forward to moving onto implementing development projects once these fundamental needs are addressed,” Kasbarian added.

After consultations with Artsakh authorities, the Tufenkian Foundation decided that it would carry out its work in the Herher cluster Martuni region of Artsakh: in Herher and its surrounding villages, including Tsovategh, Kherkhan, and Machkalashen. The Hayrapetyan and Sargsyan homes are the third and fourth of a total of 13 homes in the region that the Foundation will renovate and restore. While in Machkalashen, the Tufenkian Foundation also provided food assistance packages to ten vulnerable families in the village thanks to a gift by an anonymous donor. "Yes, we are addressing basic needs right now, but we are doing so to try to ensure that as many Artsakhtsis return and have stable living conditions, so they remain a presence on these lands," Kasbarian added.

The Sargsyans of Herher village were the second family to receive the keys to their renovated home on June 25. According to Karlest Sargsyan, the head of the Sargsyan household, the family lost everything in the war after being completely leveled by Azerbaijani fire. “Everything was destroyed; that’s what happens in war. But we thank God we survived,” explained Karlest, who lives with his wife, daughter, son, daughter-in-law, and two grandchildren.

“These are difficult times for our people, for the people of Artsakh, but I am certain that we will rise from the ashes once again, thanks to the support of organizations like the Tufenkian Foundation. We are indebted to the hard work and determination of the Foundation’s board, staff, and supporters, and I’d like to thank everyone involved—from the directors to each construction worker—for their commitment to the people of Artsakh,” Karlest said, before his house was blessed by Father Mkhitar Haroyan of the St. Vardanants Armenian Apostolic Church of Chartar. 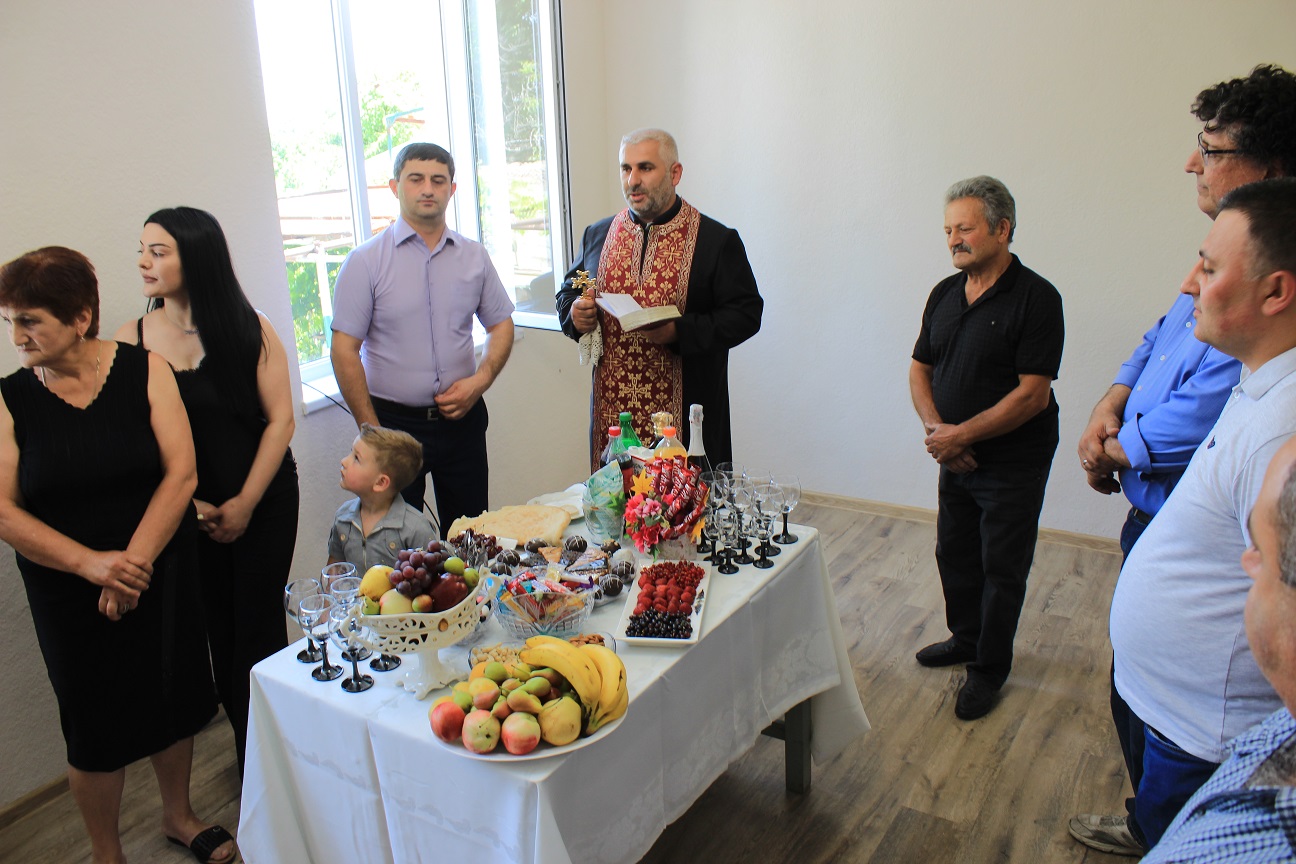 A scene from the Sargsyans’ home blessing (Photo: Tufenkian Foundation)

During the ceremony, the Sargsyan family also received a surprise gift from a dedicated Tufenkian Foundation volunteer, 21-year-old Razmig Makasdjian of San Fransisco, Calif. After consulting the Foundation’s Artsakh staff, Makasdjian, who has been volunteering throughout Artsakh and Armenia since last December, decided to outfit the Sargsyan’s rebuilt home with a brand-new refrigerator. “This is the least I could do for a family that has suffered so much. I am happy I could do my small part and call on others to help in any way they can. I am hopeful about the future of Artsakh,” Makasdjian said. 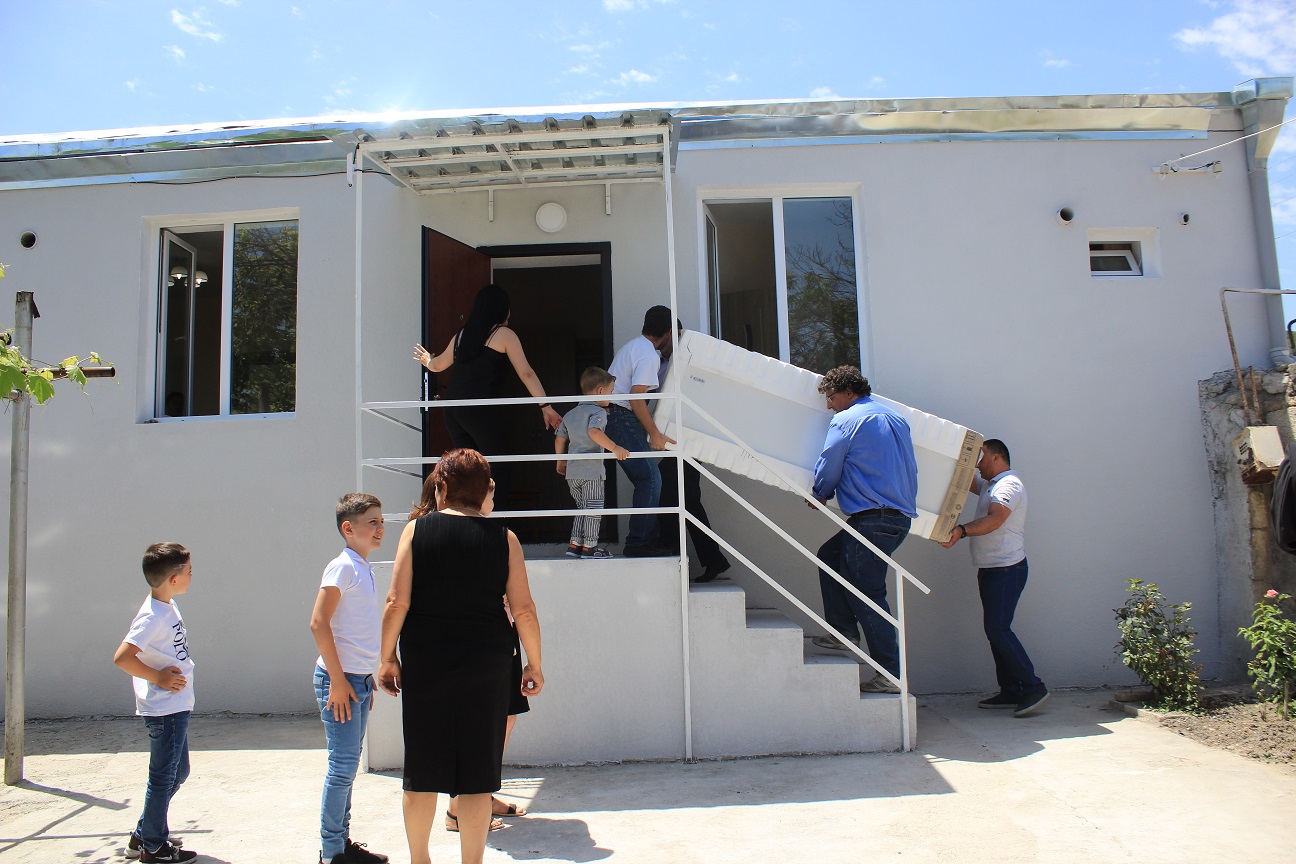 The Martuni Village Home Renovation and Repair Project is a part of a larger program initiated and implemented by the Tufenkian Foundation to address the most pressing needs in the region. As part of its Herher village cluster restoration and redevelopment program, the Tufenkian Foundation also announced that it will be launching the Martuni Village Healthcare Improvement Initiative. The initiative will restore the village Buzhkets (community medical clinics) and provide training to local healthcare workers to ensure that residents receive quality care. 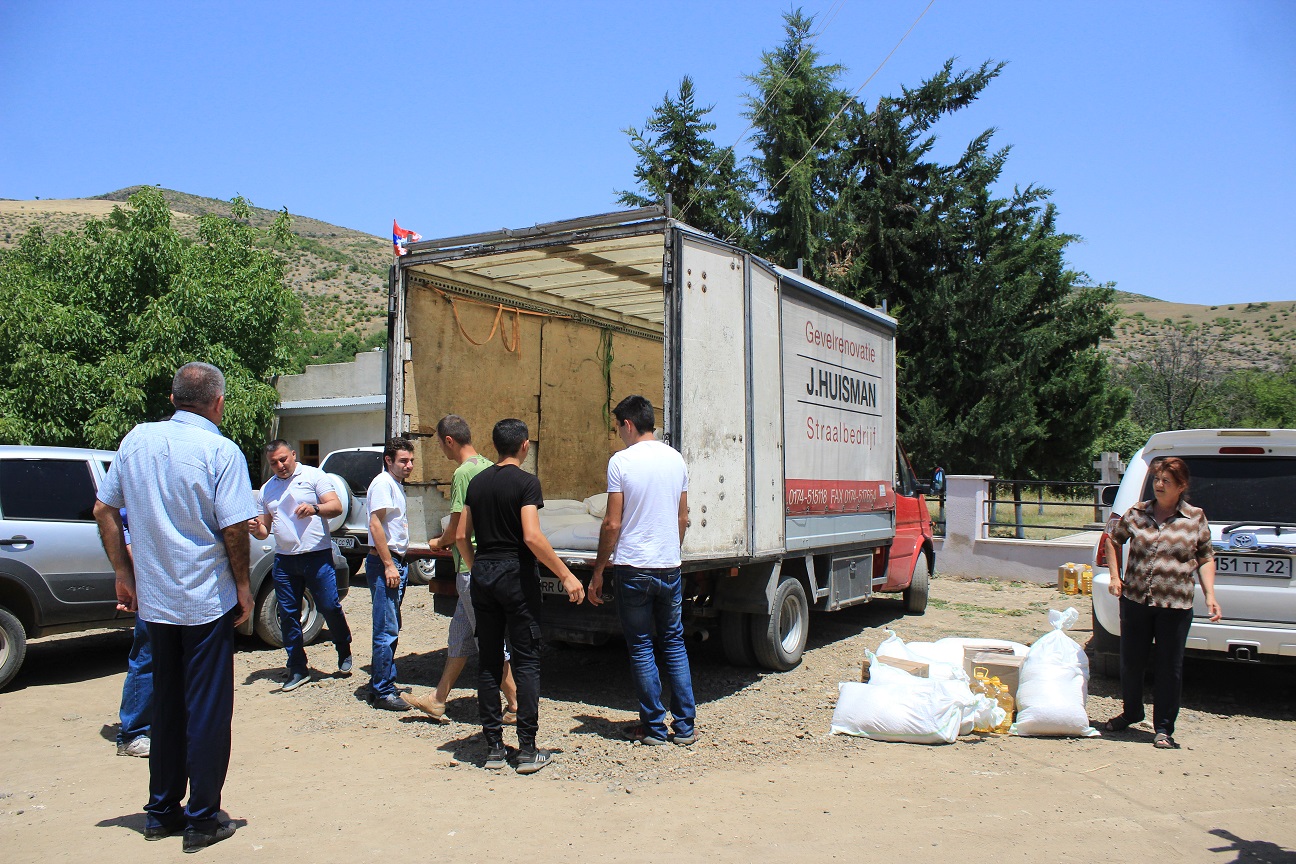 A scene from the food assistance distribution in Machkalashen village (Photo: Tufenkian Foundation)