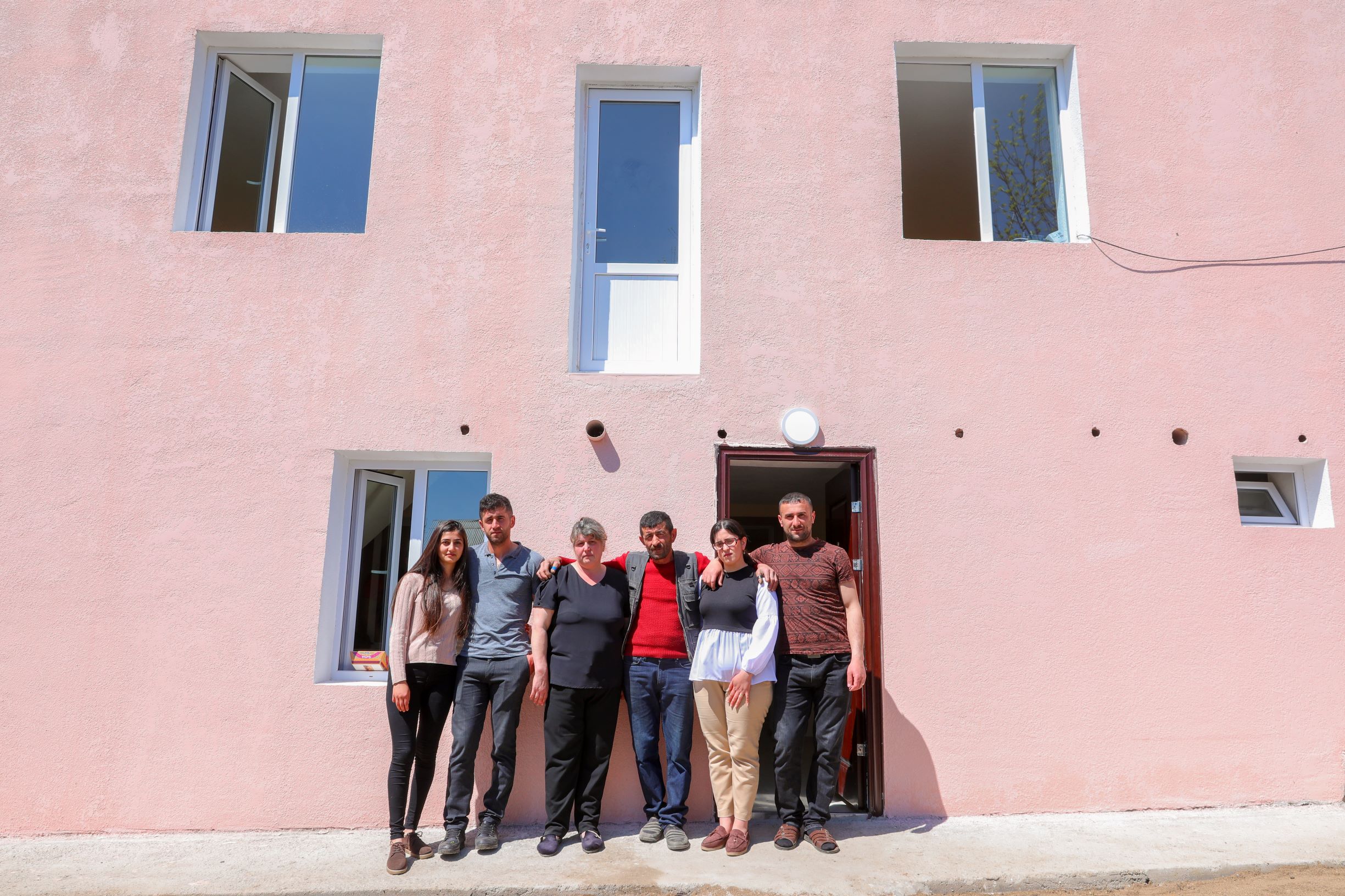 HERHER, Martuni, Artsakh (TUFENKIAN FOUNDATION)—The family of Grigory Gabrielyan, a 25-year-old soldier from Artsakh’s Herher village who was killed during last year’s war against Azerbaijan, was given the keys to their newly renovated home on April 15.

The Gabrielyan family residence is the second of a total of 13 homes in the region that the Tufenkian Foundation has decided to renovate and restore following the perils of the 2020 war. The program focuses on Herher and its surrounding villages, including Tsovategh, Kherkhan, and Machkalashen in the Martuni region of Artsakh. Through the program, residences that have suffered major damage during the war, as well as the family homes of fallen and wounded soldiers, will be completely repaired and renovated.

According to the Gabrielian family patriarch, Ara, Grigory was a kind-hearted, hard-working, and patriotic man, who was deeply devoted to his family and his nation. "My son was engaged to be wed. Unfortunately, the war destroyed those dreams,” explained Gabrielyan. “We thank the Tufenkian Foundation, who appreciated my son's dedication to the Armenian nation,” he added.

After assessing the condition of the family’s previous home, the Tufenkian Foundation determined that purchasing and renovating another property would be preferable to restoring the Gabrielyans’ existing home. A two-story house was purchased by the Foundation in January and later completely restored thanks to a generous donation made by the Swiss branch of the Armenian General Benevolent Union (AGBU) and through the efforts of Swiss-Armenian Taline Avakian.

“The Gabrielyans’ previous home was in poor condition and was not adequate for a growing family,” explained Tufenkian Foundation executive director, Raffi Doudaklian. Ara Gabrielyan’s daughter Edita and her family lived in Hadrut’s Banadzor village. The young family lost its home following last year’s war and she, along with her husband and children, recently moved back to her family’s home in Herher. “Through our programs in the region, we try to extend our deepest gratitude to the families of our martyrs and our wounded, whose children defended our homeland at the cost of their lives, their wellbeing,” added Doudaklian.

The residents of Herher and its surrounding villages came under heavy bombardment during the 44-day war against Azerbaijan late last year. Recently, thousands of families who had fled the region during the intense battles have returned to their homes, many of which had sustained substantial damages. In February, the Avagyans, a family of eight whose home sustained major damage by Azerbaijani shelling last year, were the first family to receive the keys to their renovated residence as a result of the initiative.

The Martuni Village Home Renovation and Repair Project is a part of a larger program initiated and implemented by the Tufenkian Foundation to address the most pressing needs in the region. Throughout the winter, more than 150 families in the three villages received humanitarian assistance packages thanks to a partnership between the Tufenkian Foundation and the Yerevan-based Izmirlian Foundation. Because of the war, many villagers lost their harvests and were unable to adequately prepare their food reserves for the winter. The first distribution took place on Dec. 25, 2020, and subsequent distributions were carried out in the region on Jan. 23 and March 5.

As part of its Herher village cluster restoration and redevelopment program, the Tufenkian Foundation also announced that it will be launching the Martuni Village Healthcare Improvement Initiative. “Buzhkets or community medical clinics are often the only places that villagers across Artsakh have access to immediate medical care. Our initiative will restore these vital centers and provide training to local healthcare workers to ensure that residents can receive quality care when they need it,” explained Tufenkian Foundation operation director, Greg Bedian.

“We stand by our commitment to Artsakh and its people. We will continue to invest in Artsakh’s villages by renovating homes, clinics, and schools, and implementing development programs so that we can ensure a vibrant future for generations of Armenians in the region,” Bedian added.