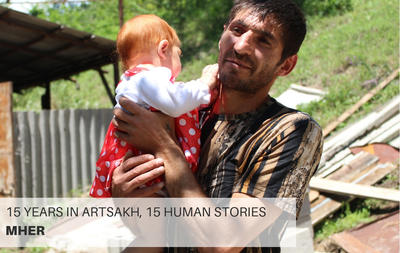 "When we heard that over a hundred people, people we have never met, lent us a helping hand, we were so thankful and so humbled. It's just great to see such generosity."​

Mher Araqelyan is one of the 10 soldiers in the "Housing Support to Wounded Soldiers" initiative of the Tufenkian Foundation.

35-year-old Mher has served in the Artsakh Defense Army for 15 years. He has dedicated all his adult life to helping his country. "I've never had another job. I never thought about having another job. I had decided early on that defending my country would be my life's work".

He fought to defend Artsakh during the Four-Day War of April 2016, where he was on the frontline the whole time. In the aftermath of the war, on April 24, when he was still on the frontline, he was shot and heavily wounded. After this, his life was never the same. After several complicated surgeries, Mher is always set to undergo two more operations.

He first joined the Artsakh Army in 2001. After serving the compulsory two years, he decided to stay as a contract serviceman.

He comes from a large family and has six siblings. "I was born into a big family, and I always wanted to have a big, friendly family of my own. Artsakh needs more children, more life."

He was born and grew up in the Karmir Shuka village in the Hadrut region. Four years ago, he married his wife Angelina, also from the same town, and started a family. Now he has two beautiful daughters, 3-year-old Alina and 7-months-old Ani.

After getting married, for three years, they lived in Hadrut, in a rented home. These were difficult years for the family, especially after 2016, when Mher had to resign from his service because of the injury. With Mher unable to work and recover from surgeries, and his wife is pregnant with Ani, their income was limited to Mher's pension, most of which they had to spend on rent.

"Before April 2016, I thought I would save enough to buy a house for my family. Or, I would build a house myself, with help from my brothers. But the injury changed everything."

In December 2017, when the family had almost given up the hope of ever having a home of their own, they crossed paths with the Tufenkian Foundation. The Foundation had already given homes to 8 wounded soldiers at this time. Soon after learning about Mher's situation, the family was promised a new home.

"This was the best New Years' gift we could dream of. I was soon to give birth to my second daughter when we heard that we would have a home soon. I was delighted that my children would grow up in a home they could call their own".

To purchase and renovate a home, the Tufenkian Foundation started a fundraising campaign for the family. One hundred six persons from across the world responded to the call and contributed to the campaign.

"When we heard that over a hundred people, people we have never met, lent us a helping hand, we were so thankful and so humbled. It's wonderful to see such generosity. I hope they know how much we appreciate this, how long we were dreaming of a home, and how difficult things were before this".

Soon after the campaign was over, Mher and his wife chose their new home, a humble house in their native Karmir Shuka. After the house was purchased by the Tufenkian Foundation and all necessary documentation was completed, renovation works started.

Now, the house is in the last stage of renovations and will soon open its doors. Mher's family has already moved back to Karmir Shuka, where they wait for their home to be ready.