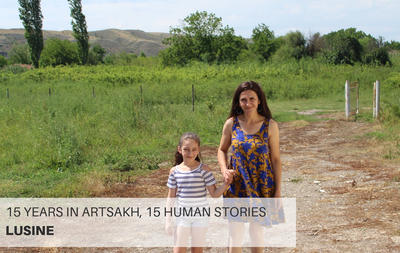 "There are times when having a local clinic is a matter of life and death. During the Four Day War [of April 2016], this small facility had become a strategic spot for our army. We treated soldiers and officers every day".​

In Ishkhanadzor, Lusine is one of those people who everyone knows and respects. As the head doctor of the local clinic built by the Tufenkian Foundation, she has helped mothers give birth, personally driven them to hospitals across the country, and diagnosed and treated many of her neighbors.

Lusine, a 39-year-old mother of 1, is one of the driving forces of the development of Ishkhanadzor, a village in the south of liberated Kashatagh. Originally from Lori, Armenia, she moved to Artsakh at a young age, at 21, together with her parents, who were teachers (during this time, there was a particular program for the re-settlement of teachers/educators from Armenia in Artsakh's villages).

Since then, she has been living in Ishkhanadzor, although this wasn't the plan initially: the family had initially planned to stay in Artsakh for only a couple of years, while their experience as teachers was most necessary.

When they arrived at the village, Lusine and her parents were given a small space to live in, a brick construction that used to be a garage․ The living situation was very disheartening. They considered it their patriotic duty to endure these conditions for a couple of years and return to Lori once the local school was up and running.

However, all these plans changed after they lived in Artsakh for several months. Despite the many hardships, Lusine and her parents felt so welcome, so needed and so valued, that they forgot about ever wanting to go back.

Before their move to Artsakh, Lusine had already finished her studies in dentistry. However, there was no clinic in Ishkhanadzor (or any of the neighboring villages) during this time. So, for the first couple of years, she was mostly engaged in agriculture, like most of the villagers.

The village would not have a medical facility until 2006 when the Tufenkian Foundation started building the local clinic. "The healthcare situation here was just horrible. No clinic, not even one medical room, no medications, no equipment, no way for people to get help without driving several hours".

When she heard that they were planning to build a clinic in Ishkhanadzor, Lusine got involved in the efforts immediately. She would visit the construction site every day and help in any way she could – from making coffee for the workers and giving them free dental consultations, to advising on the best layout for the clinic.

The first lightbulb to ever light up in Ishkhanadzor was in this clinic, during its opening ceremony on June 15th, 2006. "I will never forget that date.", said Lusine.

Lusine doesn't like to remember the times before 2006, the times before electricity, running water, and other necessities. "I'm just happy we were patient enough to endure that difficult period. Now, everything is different. Ishkhanadzor is a growing, blossoming village. People are happy to live here".

After the clinic's construction was completed, the Tufenkian Foundation also provided it with equipment and furniture. "Of course, not everything was in the best shape, and there was some equipment that none of us knew how to use at first, but we were excited to start working, to start treating people properly finally."

The clinic improved slowly but steadily. After a few years, the medical staff had a reputation as competent and caring specialists who would do everything in their power to help every patient. As they gained the trust of locals, the number of patients started increasing, making the Ishkhanadzor clinic one of the busiest medical facilities in rural Kashatagh.

Lusine's career in the clinic has been fascinating. In 2006, she joined the clinic as a part-time employee, with a salary so small she spent it all on medicine for her patients. Now, she is the head doctor of the clinic, works in parallel at the Hospital in Kovsakan, and oversees 40 other village clinics across Southern Kashatagh.

The Ishkhanadzor clinic gained particular importance in April 2016, during the Four-Day War in Artsakh following the escalation of violence by Azerbaijan. Fifteen tents were placed outside the clinic during these four days, and the clinic was divided into operational blocks utilized by the Artsakh Defense Army.

Every day, the clinic treated soldiers wounded in the frontline. "This was the most important mission we have carried out to this date, and we are always ready to continue serving our heroes, to continue serving Kashatagh. "To me, Kashatagh is the heart of Armenia. It embodies the strength of Armenians and the great love we feel for our country. It also embodies the difficult past and the challenges we as a nation have endured to stay here".