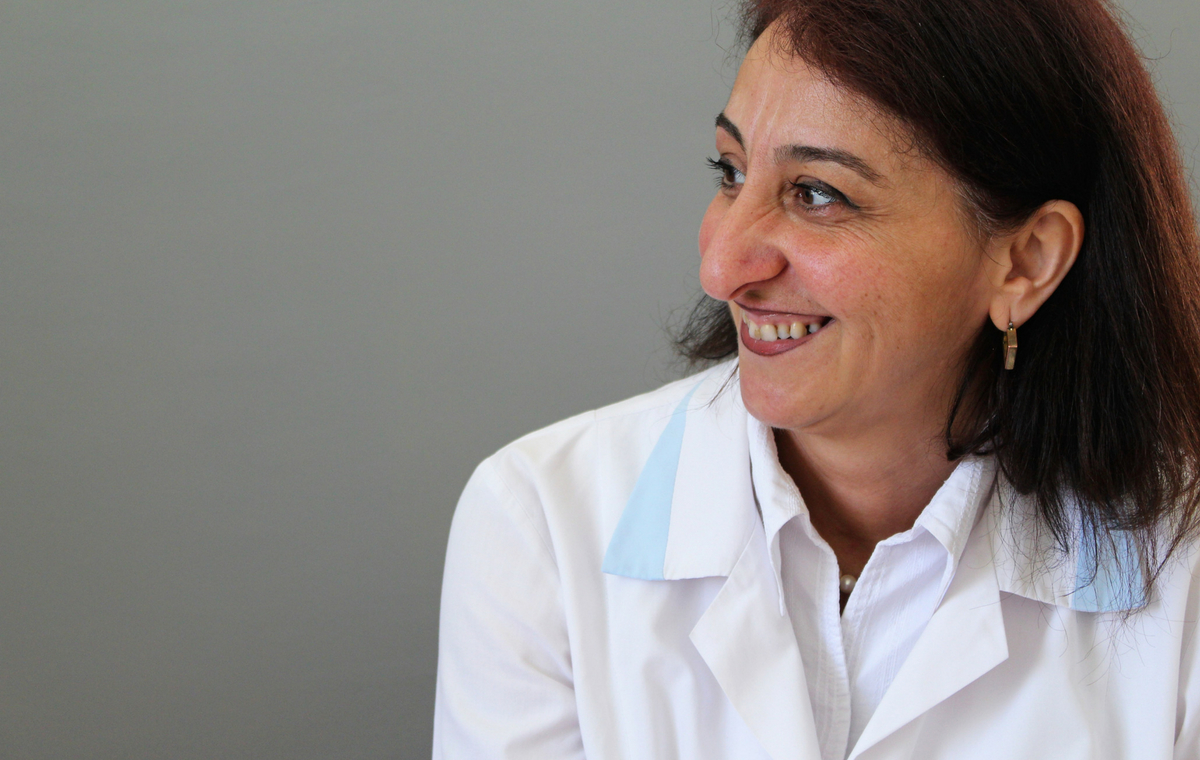 "As a nurse, I have helped save many people's lives. And yet, I consider moving to Artsakh the most important thing I have ever done. Nothing can compare to the feeling of building a country from scratch."

Anahit Tepanyan is a nurse at a village clinic built, furnished, and later renovated by the Tufenkian Foundation. She is a re-settler from Vanadzor, Armenia, and has lived in Artsakh for the past 28 years.

A 47-year-old mother of two, Anahit moved to Artsakh in 1990. Her family was one of the first participants of the resettlement program initiated by the Artsakh government in the early 90s.

With her husband, Anahit decided to start a new life in Artsakh's borderlands after years of hardship, severe conditions, and financial insecurity in their hometown of Vanadzor, Armenia. "Though this meant forever leaving our home, friends, and relatives, coming here wasn't a difficult situation. For years, we were thinking of ways to improve our lives and create a better future for our children. With this [resettlement] program, we had a chance to start our lives anew, but do it in Artsakh, a place we would be honored to call our home".

In Vanadzor, together with her husband and two children, Anahit lived in the same house with her husband's parents and two brothers. Her husband struggled with finding a stable job, and, for the most part, Anahit was the sole provider for the family. She worked as a nurse in one of Vanadzor's polyclinics, a problematic but poorly paid job that was never nearly enough to secure a comfortable life for the family.

"Perhaps, not having a home of our own and the lack of work opportunities was what made our lives most difficult." Besides the chance to get out of this challenging situation, resettling in Artsakh was a chance for Anahit to do something significant for her homeland and be a part of the effort to rebuild the liberated borderlands.

Anahit's husband moved to Artsakh first. After arriving at the resettlement center in Lachin (Kashatagh's administrative center) and dealing with the logistical issues, he chose the village of Ishkhanadzor as the new home of the family (later, it turned out, that this was a popular choice among re-settlers from Vanadzor – many of Anahit's current neighbors are from this town).

Anahit remembers the first three months after her husband moved to Artsakh as some of the most challenging times in her life. "There were no telephones here back then, and we often didn't hear from each other for weeks at a time. All I knew was that he was doing Everything he could to bring us here as quickly as possible".

Like many of her new neighbors who moved to Artsakh in the early 90s, Anahit experienced many challenges. "There was nothing here. It's nothing except for a chance to build something new, and that's what we were determined to do".

One of Anahit's most vivid memories from this time was the actual trip from Vanadzor to Ishkhanadzor. Because of the bad roads, the trip took almost the full day, which was especially difficult for her small children. "What we saw from the windows was disheartening. For the most part, it was just empty fields and ruins. But the moment we arrived at Ishkhanadzor, I understood why so many people chose this place – it was simply beautiful".

"Everything has changed since then. The only thing that has remained the same is the wonderful nature of Kashatagh, and thank God for that".

When Anahit first arrived, less than 20 families lived in the village. They all shared a problematic past and a strong desire to build a better future for their children in Artsakh. These shared feelings are what helped Anahit feel instantly at home in Ishkhanadzor.

Anahit started working as the village nurse immediately after moving here. For a long time, she was the only medical specialist in the village - not a first fill, especially considering the lack of medicine, equipment, and other supplies. There was no healthcare facility in the town until 2006 when the Tufenkian Foundation built Ishkhanadzor's medical clinic.

"In many ways, this [the construction of the clinic] was a turning point for me, both professionally and personally. I can't even begin to describe how much easier it made my life".

Before the clinic was built, Anahit used to go from door to door to provide essential medical services to the villagers. She would often have to leave her children alone at home, even during the night, to see patients living several villages away, simply because there was no else who could do this. "My husband used to joke that instead of an emergency van, the villagers should chip in to buy me new shoes because I am an emergency service." But, making her work easier was not the only way the clinic changed Anahit's life. During the twelve years of working together, the clinic staff has become her second family.

By 2006, the village had grown and expanded significantly, and it was simply unacceptable for it not to have a local medical facility. "Of course, the clinic didn't just make my life easy. It has made it safer to live here. Before this, any small incident could spiral into a big emergency because there was no way to respond quickly".

"It's always a joy to watch something being built here, especially when it's something that the village needs," said Anahit about the clinic's construction.

"I am very proud of the work we do here. We are a primary response center, and we mostly provide preliminary care and services. We help about 30-33 people a month, people coming from 16 different villages, and I should say that this isn't a small number for this region".

Despite the many hardships the family endured during the first years of resettlement, they never considered leaving Artsakh to go back to Vanadzor or elsewhere. "It was my fate to end up here to raise my children here. Now I'm sure of it".

"Even during the four-day war [of April 2016], when to be honest, we were concerned for the safety of our children, we never seriously thought of leaving Artsakh. Ishkhanadzor is our home, and that's that."

To our question about whether she would advise other families to resettle in Artsakh, Anahit said, "As a nurse, I have helped save many people's lives. And yet, I consider moving to Artsakh the most important thing I have ever done. Nothing can compare to the feeling of building a country from scratch. So yes, coming here could be the best decision you ever make."